You’re Decluttering Wrong, and Other Lies

Published by Rosie on August 16, 2015 Permalink

I’ve been on a decluttering kick recently, inspired by the neat-o ladies in my favourite Facebook groups and Marie Kondo’s admonition to keep only the things that spark joy in my tender little heart.

I was sorting out my pantry (not too bad, generally) and I came across some sad jars of jam that I’d made last year. They were sad for two reasons; one was I thought the peel in them would soften more than it did, and the other was that my husband told me after I’d put up that batch that he didn’t actually like that kind of jam. So basically every time I looked at it, rather than Sparking Joy it was Sparking FAIL.

Since I don’t live in the Depression, I gave myself permission to not try and redeem the Bad Jam by serving it as unpopular steamed puddings forthwith. I put the jam down the insinkerator and washed out the jars… 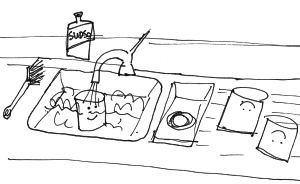 and I put the empty jars and their lids in the recycling bin, Tidy Kiwi that I am. Satisfied with myself, I went over to one of my FB groups where I’m quite enjoying sharing minor triumphs, and I was all “I did a thing! I washed out the gross jam and put the jars in the recycling!”

Encouraging “Likes” happened and I was feeling pleased until…. one guy shows up to correct my behaviour.

And of course, that is technically true.  I could have given the jars away.

In our relatively prosperous, consumer society, with its constant flow of inexpensive goods, we are faced with a problem our grandparents never had when they were our age – getting rid of too much stuff.

Furthermore, we’re over-informed, extra anxious, and infinitely aware of the environmental trade-offs of any given decision.

The landfills that were considered an excellent solution a few decades ago are no longer considered to be solving the problem.

What happens, then, when we easily-overwhelmed people try to declutter?  We get Stucked, because we can’t do the Technically Best Thing with the stuff we’re trying to get rid of, so we’ll postpone the decision until circumstances allow us to do that Theoretical Best Thing, which may never happen.

Of course, this Stuckedness and Overthinking was happening with the Bad Jam for me already, and could keep going indefinitely as long as I was willing to feel crushing sorrow every time I looked behind the sauce bottles in the pantry.

I am intensely aware of the continuum of ways to conscientiously dispose of something good that I don’t need any more.

At one end is the obviously terrible, say, tossing them out the window of a moving car. 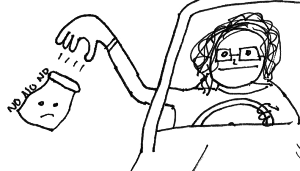 Alternatively, I could have just put the jars directly into the trash. Or, oh! oh! There is a local volunteer organisation that always needs jars; I should put them in the car and deliver them across town…

In fact, they want volunteers to make jam, I should go and get fruit from them and then make jam and then  put it in the jars and then take the jars back, full of glorious jam! Apart from the “moving car” one, these are all actual plans I had for those jars, which resulted in the Pantry of Sadness loop I mentioned earlier.

Until I decided to just do what I’d normally do when I emptied a jar of pickles, say, and what most of the population does when they’ve emptied a jar without overthinking the heck out of the thing.

I rinsed it out and put it in the recycling. It’s pretty much a known fact that when you share an action or an opinion on the internets,  there’s a risk that someone’s going to Sealion their way in to tell you that you’re wrong. Frankly, we’re pretty good at thinking up all those objections ourselves, let alone dredging up every fact and opinion that we’ve ever heard or read.

Decluttering is hard, but getting extra stuff out of your house is good.

It’s absolutely fine to get rid of things in a perfectly reasonable way.

(Don’t throw them out the window of your car, though)